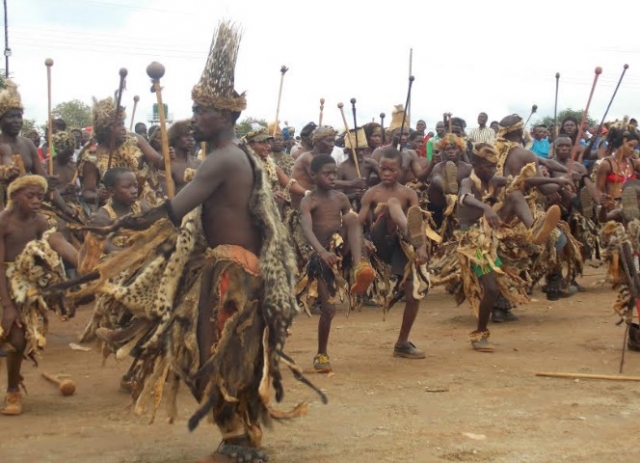 The Ngoni migrated from South Africa to Tanzania between 1820 and 1840.In twenty years they travelled over a thousand miles.The migration was called the Mfecane. This means the "great scattering".Not much was written about the Mfecane. What we know is from the diaries of missionaries and travellers from Europe, and from the stories passed down from generation to generation.

(1) Shaka and the Zulu Wars

It all started with troubles in South Africa. They began at the start of the 19th century, around 1800. At this time the Zulu kingdom was led by a powerful warriorcalled Shaka (or Tchaka). The Zulus became rich and defeated many other tribes. The different Zulu tribes were called the Nguni. In 1818 the Nguni started to fight among themselves for land and power. Different people wanted to be in charge. It led to the Zulu Wars. They fought each other for power. The ones that lost the the battles were forced to leave the Zulu lands. This was the start of a long migration to find somewhere else to live.

Zwangendaba was one of the defeated leaders. He fled north after his defeat in 1819. Zwangendaba's followers started to use the nameNgoni. Over the next 20 years they had to find ways to survive. How could they get food to eat? One way was to steal food and cattle from villages they came across. They killed people who tried to stop them. As you can imagine, they were disliked by the tribes they stole from. None of the other tribes wanted the Ngoni to live near them, so they forced them away. Each time the Ngoni were pushed further and further north. Until, eventually, they reached Southern Tanzania.

As they moved north they came into conflict. They fought the other groups who were living on the lands they crossed. Because they knew Zulu fighting methods the Ngoni could usually defeat groups that opposed them. The Zulu warriors were well trained. They planned how they were going to fight their battles. Their trick was to try and surround their enemy. They went forward to battle in a horn formation and closed around their enemy. They used assegais, which were short stabbing spears and they were trained in man-to-man fighting. Most other tribes used throwing spears. Often the Ngoni would make a mock charge, get their opponents to throw their spears and then stab them with their assegais. After the battles they would force the young men to join their army and take young girls for wives. Other people, including the old people, were often killed.

The Ngoni specialised in fighting. That was all they knew. They could not produce their own food. They had to keep moving to find new villages they could plunder. In 1835 they crossed the Zambezi River. They were becoming tired of battles. Around 1842, they settled in the region between Lake Malawi and Lake Tanganyika. The king of the Fipa people, who lived in that area, made peace with the Ngoni. This saved his kingdom from being destroyed. Zwangendaba built his own capital called Mapupo, which means "dreams". For two more years they raided neighbouring people, the Sukuma and Msafwa, to get food and cattle. Then they settled down with their animals and families, and started to grow crops.

Zwangendaba died in Mapupo in 1845. He was buried in an ox hide at Chapota, near the Nyinaluzi River. He fled from the Zulu Wars in South Africa. But he spent the rest of his life fighting other tribes for survival. He was a great warrior and leader. He is still considered to be the father of the Ngoni.After Zwangendaba's death his family fought over who should succeed him. His group divided in two. Then each of these groups split up. In the end there were 5 separate groups. Three went back to cattle raiding, in Malawi and Zambia. Two groups went north as far as Lake Victoria. There they found Arabs who were taking local people as slaves. The Ngoni sold some of the people they captured to the slave traders.Other groups learned the fighting methods of the Ngoni, and started to defeat them. Many Ngoni moved back to Southern Tanzania. Others were either killed or settled down to live with local people.Another Ngoni group, called the Maseko, reached Songea in Southern Tanzania from the eastern side of Lake Malawi. There they settled and intermarried with the local people called the Yao.

(5) Effects of the Ngoni migration and the Mkecane
The Ngoni migration and mfecane caused trouble for 20 years, in central and east Africa. Thousands of people were killed by the Ngoni. Villages were destroyed and people were forced offtheir land. Many of them starved due to the lack of food. The main problem was that the Ngoni knew only one way of life and that was fighting. The only way they could feed themselves was to plunder and kill. They even sold many of the people they captured to slave traders. This caused more misery throughout East Africa.Eventually the groups the Ngoni fought banded together for protection. One of the Sangu chieftains, Mwakawangu, united the people to defeat the Ngoni invaders. This gave the Sangu control of the rich, farming area of the Southern Highlands. Other groups also realised that they had to be strong to protect their livelihoods.At the end of the 19th century, Germany colonised Tanganyika. The Ngoni were one of the groups that fought hard against the Germans. But in 1907 all the Ngoni chiefs were hanged for fighting. Today the Ngoni have married into the tribes they conquered. It is now difficult to know who is Ngoni and who is not. But their traditions and way of life continue the Ngoni and the Zulu